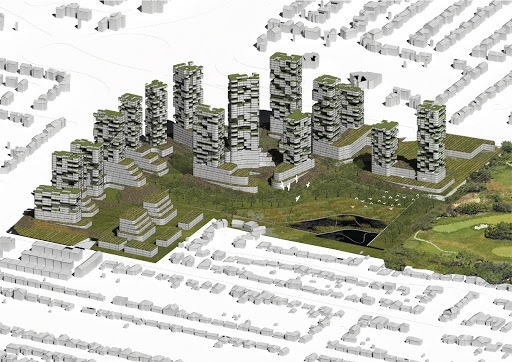 Using a nature-first approach, the redesigning of Dixie Mall was envisioned to revitalize the existing grey-scape by addressing the call for a more climate-resilient establishment leveraging on ecosystem services and, built with cost-effectiveness in mind.

With the current site condition having relatively few natural assets, this project presented the opportunity to recreate Dixie Mall’s ecosystem from scratch while balancing the ever-growing need for economic productivity.

The project had three main aims which included (i) increasing access to nature, (ii) increasing ecosystem interconnectedness and (iii) implementing biomimicry strategies that worked in tandem with natural systems. An evaluation of ecological design parameters and quantification of ecosystem services was necessary to provide insight into how these goals could be achieved.

Cover Image: A bird’s eye view of the new precinct. From mono-use to highlight functional and green. Visual by Biomimicry Frontiers

bioSEA conducted an ecosystem service evaluation and advised on how best these services could be optimized through the incorporation of biophilic facets.

Measures of ecosystem service provision become meaningful when compared against relative scenarios. Four scenarios were contrasted – (i) existing site condition, (ii) proposed design, (iii) Two planet scenario and (iv) One planet scenario. The latter two fictional scenarios were proposed alternatives that increased access to nature. The ‘Two planet scenario’ represented a set of strategies that theoretically functioned within ‘two planet’ living conditions i.e., if everyone consumed as much as this development, the human population would need two planets to survive.

The results showed that the proposed design performed up to 90% better than the existing site in terms of air pollutant removal and sequestered up to 52% more carbon through strategic provision of greenery. When the proposed design was compared to the ‘One planet’ and ‘Two planet’ scenarios, the ‘One planet’ scenario with its intensified green design coupled with nature-based solutions showed the potential to perform up to 5 times better in the areas of air pollutant removal and 3 times better in providing direct shading and regulating air temperatures. The ‘Two planet’ scenario on the other hand showed that the lack of a nature-centric approach to construction and development would result in the establishment performing only up to another 30% better in providing various ecosystem services.

Through this assessment, we suggested context-appropriate nature-based solutions to achieve the desired outcomes. The results of the ‘One planet’ scenario were pivotal in understanding that the right concoction of solutions reduces the long-term costs of the project and also provides positive benefits in the form of constructing a sustainable, equitable and resilient development that provides continued returns to key stakeholders and the community at Dixie Mall.

Adapted by bioSEA, base visual by Biomimicry Frontiers