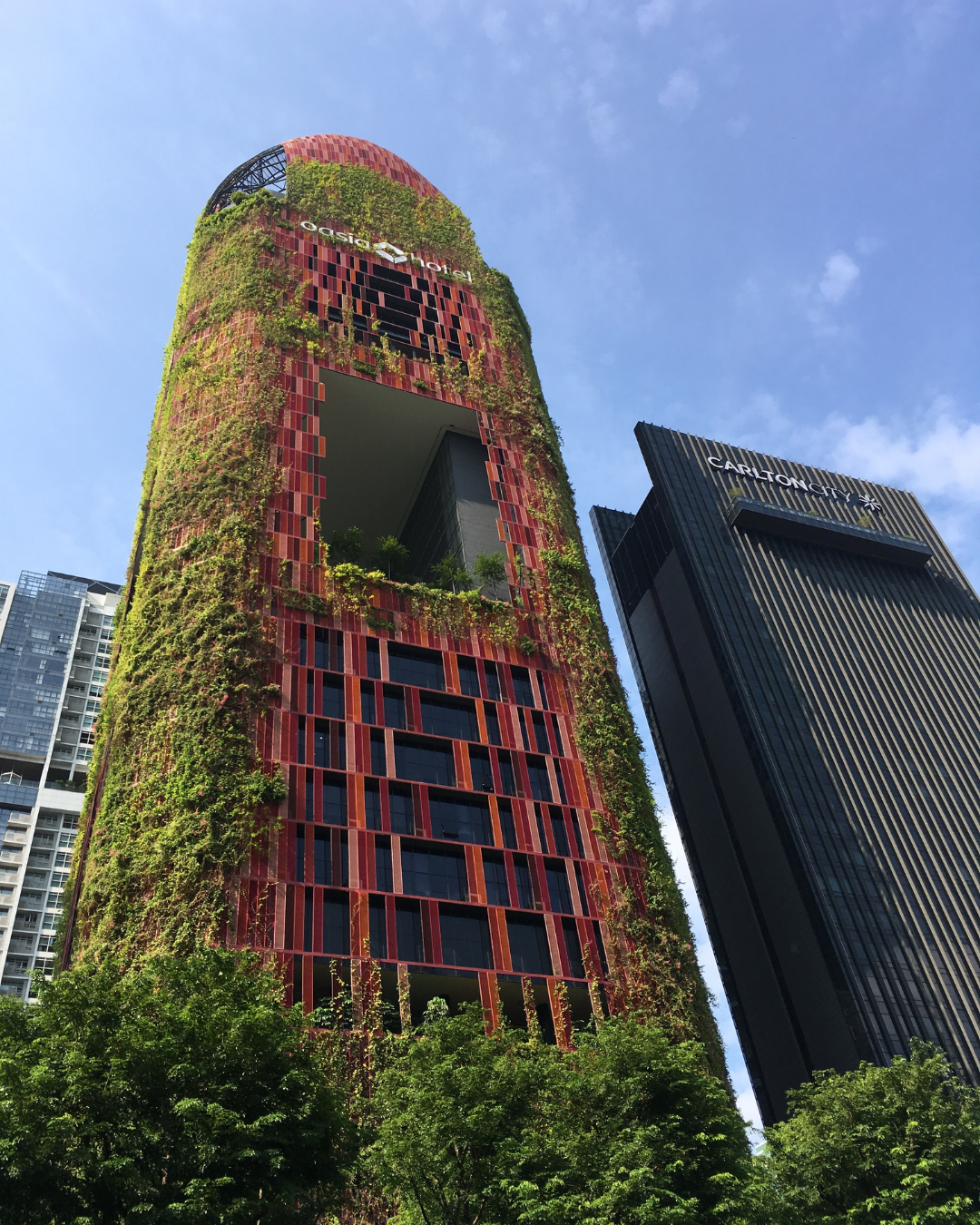 OASIA Hotel Downtown is an iconic development designed by WOHA with the intention to re-imagine high-rise buildings in the urban tropics. A tower of green, the building is nestled in the heart of Singapore Central Business District (CBD).

The brief called for a Soho inspired hotel with luxury amenities but WOHA went above and beyond the call for creativity with its club sandwich approach. Each built level is layered with an intensified green level, in the form of a sky garden, and the building facade is shrouded in a thin cloud of greenery with provisions both food and habitat for urban wildlife. The building takes into careful account the use of natural breezeways for passive cooling and good cross ventilation by having a porous, perforated structure that is uncommon in cities with high urban-densities.

The careful inclusion of biophilic elements makes this building a stand out in the urban jungle of Singapore and was recognized as such by being given the Best Tall Building Worldwide 2018 award.

The project site in comparison with references sites.

OASIA is a remarkable building in that it has displayed how luxury establishments can go beyond the template tall glass buildings dripping with exuberance and instead use nature as its front-running show stopper to elevate a building’s appeal. Furthermore, no longer is nature just an ornament in our built environments but rather a necessity which brings a suite of benefits to both humans and other biodiversity. WOHA recognized the need to quantify these ecological benefits so that future establishments could be imbued by the findings, giving rise to better, more sustainable and innovative biophilic design.

An extensive 6-month assessment covering diurnal and nocturnal surveys was carried out to reveal 18 distinct animal species on site. To contextualize these results, biodiversity in the neighboring Duxton area, green patches around OASIA and Spottiswoode park were surveyed. The comparison showed that OASIA accounted for almost 50% of the total species commonly seen in the vicinity.

The vibrant shades of pink, purple and yellow flowers on the façade attracted honey bees, bulbuls, orioles and sunbirds and the lack of reflective surfaces was effective in reducing bird collisions. It can be easily be said that having more buildings in the CBD replicate OASIA’s design would invite biodiversity back into Singapore’s urban environments.

We then conducted a social survey asking the building users about their thoughts on OASIA being dubbed a ‘green building’. 88% of those surveyed were very supportive of greening efforts stating that they found the greenery made their stay much more positive and relaxing. People intuited that the inclusion of nature also improved air quality and cooled down buildings in the neighborhood. And lastly, some mentioned how such building typologies could ‘create more awareness of green life in our modern society’ suggesting OASIA has created a foundation upon which biophilic design could grow in Singapore.

Our ecosystem service evaluation showed that despite being a compact development, the direct shading offered by the planted façade significantly reduced the amount of heat trapped within the development. In other words, it offered passive thermal cooling benefits and due to the greenery provision being ten times that of its footprint, it performed up to 68% as well as a pristine rainforest would, in terms of ecosystem service provision.

The ecological audit of OASIA Hotel Downtown was the first of its kind done in Singapore at the building scale. It has the potential to influence and shape how environmental management occurs in rapidly urbanizing cities such that the needs of biodiversity and humans can be better catered to.